This morning I was looking for flights from Sydney to Melbourne. When typing in ‘Qantas’ into Google, I noticed that only the paid ad appeared above Google Flights – Google’s own comparison product for flights. You can see the screenshot above – the paid ad for Qantas is at the very top of the search results, followed by Google Flights. Below Google Flights was then the organic link for Qantas (which Google provides free of charge). I was curious whether this was just a single incidence – one may argue that something could be wrong with Qantas’ SEO. However, I found the same results when searching for Virgin, Jetstar and Air New Zealand (see schreenshots below). 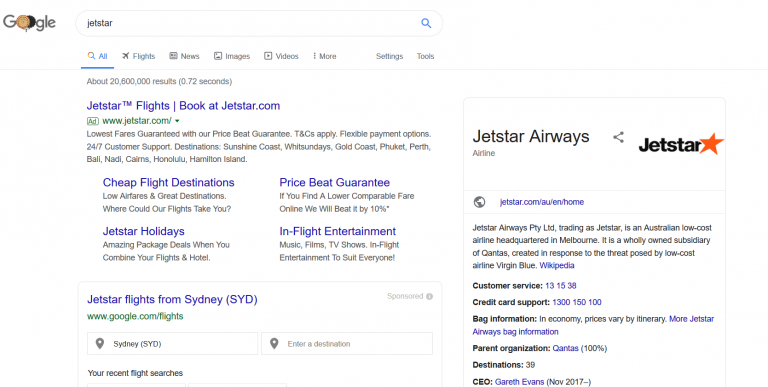 Why is this interesting? There are 2 reasons.

1. Is this anti-competitive behaviour?

Over recent years, there has been a lot of talk about Google pushing up its own products unreasonably. Already back in 2010, small European companies, later joined by Microsoft, accused Google of unfairly promoting its own products over rival offerings. In 2011, the Federal Trade Commission (FTC) began an antitrust investigation of Google in the US . The case was dropped in 2013.  Google’s legal argument seems to have been that its goal is “to present consumers with the best results, and if this sometimes meant showing results from Google’s own services above those of competitors, so be it”.

However, since 2011 many more companies have voiced their concerns about Google’s allegedly anti-competitive behaviour and misuse of market power.  Yelp has been fighting for years to get regulators to punish Google for alleged misconduct. It even teamed up with other companies and created a website called Focus, where it presents examples where Google results are supposedly not showing what’s best for consumers.

While the FTC has ceased its investigation in 2013, the EU hit Google with an antitrust fine of €2.4 billion in 2017, the largest antitrust fine issued by then. Of course, by now many more countries and US states have started further investigations into the practices of all tech giants, including Google.

In Australia, the ACCC conducted an inquiry into digital platforms. The final report, released in July 2019, made 23 recommendations to  protect Australian consumers from market power abuses and to improve media competition. While we still need to see which recommendations will be addressed,  the government seems to have accepted the ACCC’s call to proactively investigate, monitor and enforce issues of monopoly power and breaches of privacy law.

Could the airline search example be the first case of anti-competitive behaviour?

I will leave this decision to the experts. But as a consumer, I can say that I personally expect Qantas to be at the top of my search findings and above Google products when I search for Qantas, no matter whether they pay for an ad or not.  Put differently, arguing that Google Flights should be ranked higher than a search competitor like Expedia or TripAdvisor may potentially be reasonable: One could argue that one platform is better than another (although one wonders whether Google should be the judge on this). It’s search product versus search product. But ranking Google Flights higher than than the organic link of Qantas, Virgin or Air NZ seems to ignore what customers are actually after.

2. Should brands pay for their own search brand terms?

In addition to the question of possible anti-competitive practices, the airline example also raises concerns about the need to buy your own brand terms as an advertiser. Most companies spend fortunes to bid on their own brand search terms. These are terms that are clearly linked to a brand or the brand itself, such as Toyota or Prius in the case of the car manufacturer Toyota.

One question is why companies even buy their own brand search terms in search engines? If a consumer types the brand name into a search bar, they already have the intention to visit the brand’s website or to find out more about the brand. In contrast, a consumer who searches for general terms online (e.g. car) may not be interested in a particular brand yet. Offering ads to such customers seems to rather help inform them.

From an advertiser’s perspective, the issue is the following. If a person uses brand terms in their online searches, we would expect the organic search ranking to be the top link if a search engine does what it is supposed to do – helping you find what you are looking for.  Of course, this only works provided the brand’s SEO (search engine optimisation) is set up properly by the marketing team too.

A study published in the prestigious journal Econometrica showed exactly this finding for Ebay in the US: once Ebay switched off their paid ads for their own brand terms, organic (also called natural) search traffic picked up all the traffic that would have come from paid advertising. The graph below illustrates this: when Google paid advertising was turned off, the blue line goes to zero and the red line (showing natural search clicks) increases by the same amount. In other words, why paying to win customers who already know your brand and seem to be prospects who seek you out (the goal of any advertising)? 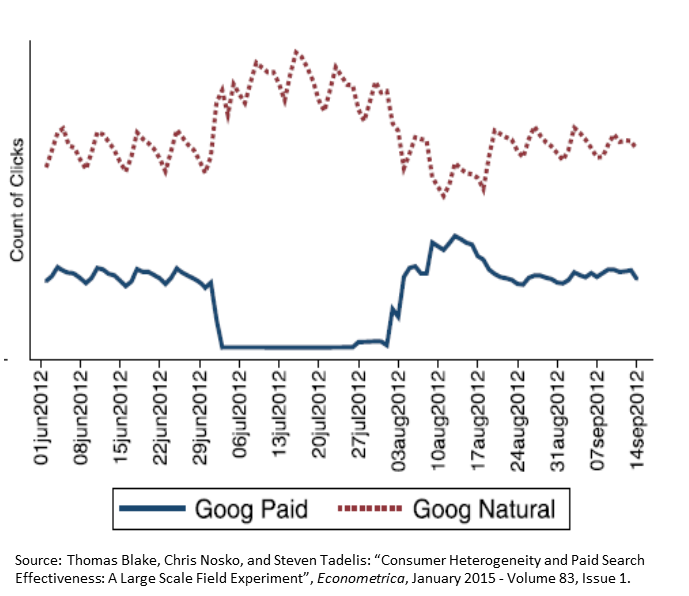 Some readers may wonder now: given this study was published (and many search specialist are aware of this search engine behaviour anyway), why are so many companies still paying for their own search brand ads these days?

Well, the answer is simple. Brands are afraid that their competitors buy the search term and steal their customers. This only works because Google will prioritise paid ads over the organic search ranking. Therefore, many brands prefer to pay and secure their own brand search terms to not lose customers they already won. It’s a classical case of prisoner’s dilemma. If you don’t buy the ad, someone else will (something that also applies to all advertising). Ironically, both parties (the brand and the competitor) would be better off if they didn’t buy the ads at all. But because you cannot trust the others, you suck it up and buy it.

Is this fair? Certainly not. Google is the only one benefiting from this questionable scheme. Companies have argued to what degree bidding on competitors’ keywords is even legal and when trade marks or IP are infringed. They have had little success. Last month, BaseCamp run a funny ad on Google to draw some attention to the issue of placing paid ads above organic search links. They compared this practice to paying ransom (see screenshot below).

Back to our original post – what does this have to do with the airline search findings?

Well, it has always been a controversial requirement for companies to bid on their own search terms to stop competitors from stealing customers who should be theirs anyway. However, the search-finding hierarchy shown for the airlines above (Paid Ad – Google Flights – Organic Ad) suggests even greater pressures. This is because the hierarchy implies that Google Flights may be the top result if airline brands don’t buy their own brand names on Google. This would mean not only competing with your direct competitors, but also with Google who owns the platform. If you think about the prisoner’s dilemma, you may now find that it is impossible to escape without paying for the brand ads. Competitors may not necessarily notice if you don’t buy your brand terms. Or they may have understood that only Google wins and not bid on them. However, Google – as the platform owner – would notice if you don’t buy the terms. Hence, with Google competing for the same search ranks, it seems impossible to not pay for the brand-search terms anymore.